Well I was going to do all sorts of things... including some tutorials for you to check out this week... but the best laid plans often go out of the window for me...lol I developed a cold on Friday and it has blown my socks off... I have sneezed, coughed and spluttered my way through the last few days so as you can imagine it's not the best way to attempt any crafting. I gave up on the tissues and adopted a pack of quilted loo roll which has been my best buddy and never been far from my side and oh if that loo roll could speak what a good tale he would tell because believe me I am NOT a good patient and even whinge at myself...rofl.
I have had a little smooth with the rough though, through watching this years "I'm a celebrity get me out of here" I don't usually get really involved a lot with these tv programmes... choosing to watch them only now and again... but hey I am going to be tuning in to this series and waiting every evening for the next episode!! I caught the first episode by chance because I had forgotten it was starting and I am sooooooo glad I did because I haven't LAUGHED so hard and for so long in many a long month. I laughed so much that I almost wet my pants... WHY ANY sane person would put themselves through the ordeals of putting their hands on huge creepy crawlies or eating such unappealing morsels as eyeballs and kangaroo testicles is totally beyond me... urgghhhhhh with a capital U.... rofl Mind you as daft as THEY are... I guess I'm dafter for watching and most of it is seen from behind a pillow as I cringe and squirm ;-)
Anyway on to nicer things.... I finally managed to create my arch for this weeks Gothic arch challenge and as I have been in the mood to experiment lately I decided to watercolour the background and the paper for the edging and flowers. The black base card has a slight marble effect on it but unfortunately doesn't show up well on the photo. The silhouette is a printable from Cen's crafty bits. 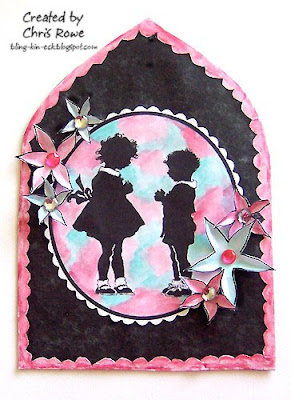 Now then last week when I spent some crafty time with my pal Chriss I was itching to do some altered dominoes... 'specially since the prize I won last week from Karen's Christmas card challenge was stamps that fit so beautifully onto them. I had no alcohol inks... but I hate to be beaten so tried all sorts of inks ...drawing inks, printer inks, etc to try and get a similar effect :D ... nope it wasn't going to happen... BUT I had another electric light moment (need one of those symbols for my blog..lol) and decided to try my Sharpie pens because they are permanent to see what would happen. 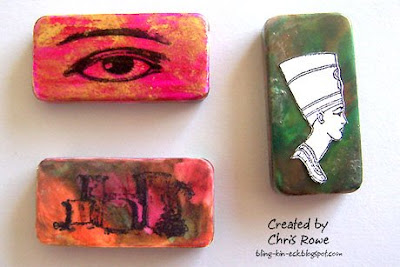 Well after hours (and I mean hours!!) of colouring the dominoes and attempting to smudge the ink with the pads of my fingers... it worked a little :D Almost had no skin left on my fingers ... so I wouldn't recommend trying it..lol but I was happy enough with what I managed to do and went on to decorate this tin... 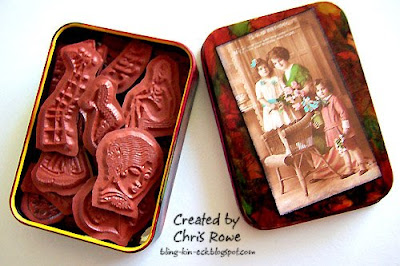 so I have now got something to put my tiny stamps in AND something pretty to look at too. 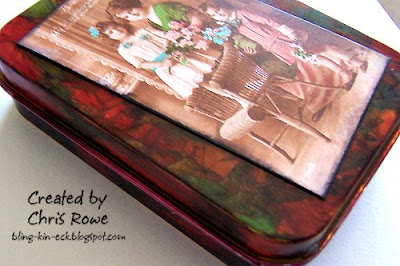 I will however NOT be attempting to recreate any of these project until I get some alcohol inks ( which by the way... I ordered today..rofl...naughty girl!!) Well a girls gotta do what a girls gotta do ;-D
Sorry it was such a l-o-n-g post... congrats if you are still awake :)
hugs
Chris xx
Posted by Chris at 5:09 pm

beautiful arch and tin!!!! love them!

Great work Chris and 10/10 for persistance!!
The dominoes and tin look really good and those stamps are sooo cute! I've vowed not to watch IACGMOOH this year...wonder how long it'll last..... :-)
Hugs
Linda xxxx

What lovely work. You have magic fingers. I keep saying that I won't wander towards Hobby Craft which is only 5 mins drive from my house but invariably I think of something that I need to look at there and then you know what happens lol!

Oh sympathise big time on the cold front Chris...had mine for a week now and just can't seem to shift it...hope you are feeling better now...love all your latest creations and hey you need to treat yourself to some crafty stuff when you are ill...it's the best cure.
Hugs
kath
xxxxx

Wow, these are great. Well done you for being so creative using those pens! Hope you are feeling better. I seem to get sick almost every week now! thanks for the comment on my blog. can't wait for the next challenge.

What a lovely arch, Chris!

You've been making all sorts of fab stuff Chris, s'all lovely lovely.
Hope your cold gets better soon and OMG how funny is Im a Celebrity! I dont normally watch it but this time round I saw the first and now Im hooked LOL

Hey friend wonderful arch liking the silhouette images thanks for joining in with this weeks challenge.

Hey, creating those dominoes was a challenge in and a half... we should have videoed it and could have used it for a demo tape...on how NOT to alter dominos...lol it was sooo funny... we would have had to beep out a few words..lol
now if that wasnt enough you went on to do the tin too now that took for ever and a bottle of fairy washing up liquid to clean your hands...BUT must say it turned out gorgeous.

well done and thanks for the entertainment whilst you were altering.
PS don't dare come over to mine later this week without those new fab inks you have ordered... rofpmsl.
Hope your old gets sorted so we can play.

I think it worth all your fiddling Chris! Your tin is wonderful! Your arch is lovely too BTW! oxo

Your arch is lovely! I hope you're feeling better today. :-)

OMG OMG OMG what a cute arch Chris. So lovely. And the Tin and the domino´s are so brilliant. Wonderful work.

I am loving the silhouette ideas , Chris!

& your altered tin & dominoes are just darling ! alas even with sore fingers after that ! so well done on ordering those alcohol inks ! ( hmmm now that's another lightbulb moment for me too ! lol )

Your persistence paid off Chris - those dominoes and tin are gorgeous. Love your christmas tag and arch too - beautiful!
xxxx Karen

Chris you are SO funny!!
ROFL at your post - everyone seems to have this bloomin' cold it hasn't wormed it's way towards me yet anyway!!
Love your arch those silhouettes are great and so are your dominoes what with all the painstaking rubbing you have done - I would have given up!! and what a brilliant idea for your wee stamps - mmm!
Did you get your inks today....
Dawn
x

Love those tiny little stamps Chris, the tin looks fab , and the dominoes look really lovely. I enjoy working with alcohol inks, Ive made some great backgrounds but i end up keeping them as they are as i love the colours and patturns etc.
You will enjoy playing with your new inks when they arrive, Jaqi x

Chris, I so hope you are feeling better, I hate having colds.

Your arch is adorable and I so love the dominoes and tin. Great work.

I admire your resourcefulness - the tin is gorgeous.
The arch is pretty too - very soft colours!

That arch is gorgeous!!!! The tin is just a perfect gift, so many uses that I can think of. Yet an other of your unique ideas!! Love them!

Hi Chris, i love that little creature at the top.....looks a bit like me in the morning lol. :)

That tin is great! Love it.