I think I mentioned that my cup this year was going to remain half full.... but that was before it developed a crack in it!!! I don't know if it started as an old wives tale but things certainly have a tendency to happen in three's don't they.

Over the last few days I've been ready for tearing my hair out on more than one occasion... thanks to my car battery going flat and needing nothing short of a bolt of lightening to get it going again. Being without wheels is not much fun when you are looking after an 8yr old with the attention span of a gnat for four days (much as I love DG patience has NEVER been his middle name...lol)

So that was my first hiccup...then my washing machine started to play the fool and with a finished load of washing stuck inside with a door that refused point blank to open... the steam began to build up in my ears, the final straw came when the bottom fell off the cooker.... sweary words came thick and fast and in sheer frustration I kicked it... like that would help eh...rofl

Anyway all's well that end's well... temper tantrums over (and me such a mild mannered person usually). DD managed successfully to jump start my car (after other attempts had failed and I had FORGOTTEN!! I had AA membership...lol) After re-running the washing cycle the door opened without so much as a sorry I upset you and I found the spring which had removed itself from the cooker bottom and all is right with the world again :D

This week I have finally managed to get myself into the mindset that chocolate will NOT help me lose weight... well that and the fact that I can't just eat one square... I'm a kind of all or nothing gal if you catch my drift. So I have emptied the cupboard and fridge of all things naughty and unhealthy and filled them with wholesome goodness to help me reduce the double chin I seem to have grown without blinking!! I do not see myself as being on a diet because staying power doesn't come easy to me and where food is concerned my willpower is sparse.... so I am going to eat healthily like a good girl and hopefully regain at least a little bit of the figure I know is hiding under the Michelin man guise it holds now...lol The deciding factor being that the scales groaned under me as I recently stood on them and screamed "GIRL YOU GOTTA BE KIDDIN' ME... !!"

So just to give me a little bit more of an incentive to keep the chocolate bars where they should be (IN THE SHOP) I am telling the world and his aunt and any one else who probably isn't tickled by knowing that I am now 14 st 12lb and am going to keep a running countdown for myself in my sidebar... just in case you are wondering what the heck it's all about.... wish me luck :D
Ok you had enough of me rattling on...heh heh
Anyone in the mood for Valentine's. Well I didn't think I was in that mode yet but couldn't stop myself from making this card... 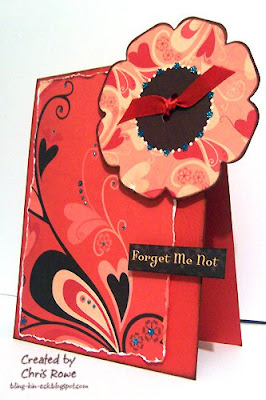 More from the Cosmo Cricket Chemistry range... OMG I just luuuuurve the red!!! and the pop out die cut flower shape. 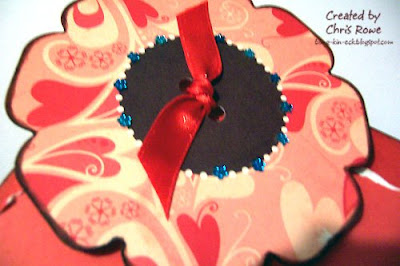 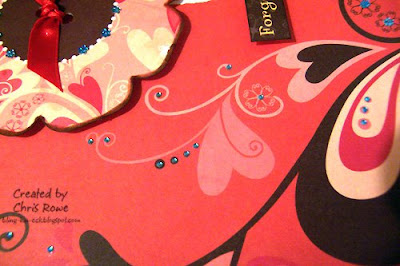 and no-one wants to be forgotten on Valentines day so the sentiment just fit so wonderfully along with more tearing from me and little flower bling (though it's not shining in the pic) added to the centre of the flowers on the paper too just because I could :D 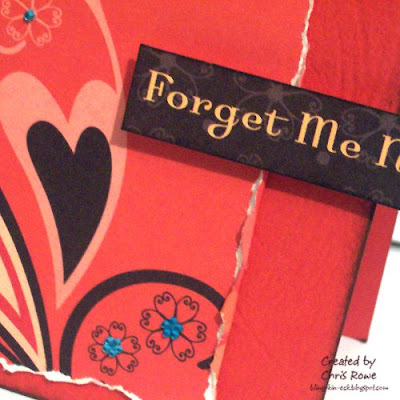 My apologies for the fact that I haven't managed to get round to commenting much on your blogs this week too.... I will pop by as soon as I can.
Have a great week
hugs
Chris xx
Posted by Chris at 8:02 pm

Hi Chris
Glad things worked out in the end. Your card is wonderful. I love the papers you used.
Hope things go well this week.

ROFL PMSL!!! as per usual when I stop on by - Tena Lady at the ready!!
Loved the bad three's - but alls well that ends well - I had visions of flooding, broken toes and stranded on the M1!!! LOL
Wow that card just wows you right off the page - stunning flower!

hehehe you and me both! healthy eating is the name of the game! Well at least you have had your three baddies. Life's on the up from here on in! Lovely card, as usual!!
Hugs
Denise
oxoxox

Well they always say it comes in three's but glad to hear everything ended well.
Wishing you loads of good luck with your heathly eating, I did the weightwatchers plan a couple of years ago and lost 2.5 stone in 6 months.
Stunning card...gorgeous papers and flower.
Emma x

Gorgeous papers and distressed edges, and I love the pop off flower.
Looks like your run of uck is over. Have a GREAT New Year!!!
Love ya, sister from another mister.

Sorry to hear about all that's happened to you in the last week or so. {{{HUGS}}}

OMG Chris you start the new year with a wonderful card. So inspiring work and the colors so shining. Love them. Hugs.

hahahahaha LMAO here Chris!!!! Its the way you tell'em honey! Lovely card from you to start the New Year. Seems ages till V Day but I suppose its only about 6 weeks X

Love your threes . . . you tell a wonderful story :-) Had me hanging on to your every word, and I can join dg where attention spans are concerned!

I am aiming to get fit . . . solid fat is better than wobbly stuff :-) Of course muscle weighs more than fat . . . so that's not going to be encouraging :-D

Great card. You love the CC stuff don't you? I must check it out :-)

Hi Chris, just popped over to thank you for popping over!!! :-)
Thanks for your kind words. I love your blog and think your card is absolutely fabulous (darling). Will definitely be back, if only to hear the next episode of half empty or half full.
Jen x

ee..by...gum Mrs...you have been having a time of it...but all's well that ends well..you know you and i are so alike...we could have been twins in another life....gorgeous card and I so love the red....ooohhh so passionate and sexy.
Hugs
kath
xxxxx

Your card is sooo beautiful...Chris I so love your unique style:)every little detail is so precicly placed and soo beautifully finished..You are just fabulous chick:)~X~
and Oh How we can laugh now!!!
Hope your ok and things are running smoothly !!!Was great to talk on the phone the other night!!!
Sending a great big massive hug my gorgeous Lady friend:)~X~

I should do the same as you! :) Everyone got me chocolate and I need to get rid of it...but not by eating it! Ha! Lovely card too! I love looking at your creations!!

Happy to hear that things worked out well in the end. I certainly would have been hitting the chocolate if I had experienced all that bad luck. Your card is beautiful.